Himeko Kishi ( , Himeko Kishi?) is a mysterious student in class 1-1.

Himeko is tall with long, light hair tied back in a ponytail. She wears the Itan High School Uniform, but also wears knight's armor from her elbows down and knees down.

Himeko is an enigmatic character who appears as part of Ren Yamai's troupe of popular girls. Her face is always hidden from view either behind other characters, covered by speech bubbles, shown with her back turned or omitted from distance. She avoids involvement with the main plot through distance and by chatting with Onigashima Akako in the background. However, unlike her fellow background friend, Himeko does not receive any special anointment. 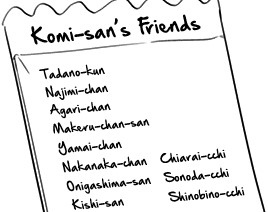 Retrieved from "https://komisan.fandom.com/wiki/Kishi_Himeko?oldid=1941"
Community content is available under CC-BY-SA unless otherwise noted.